Senior forward leads the NCAA in points this season.

Just based on individual statistics, you could make a strong case that Taylor Heise of the University of Minnesota should win the Patty Kazmaier Memorial Award as the best NCAA Division I women’s hockey player in the country.

In 39 games this season, Heise, a senior forward from Lake City, Minnesota, led the country with 66 points on 29 goals and 37 assists. That is six points more than anybody else.

If you want to see her true impact — on and off the ice — it’s best to look around Heise.

“One of the indications of somebody who’s a great player is when they make their linemates better,” said Minnesota coach Brad Frost. “Not only has Taylor elevated her own game to be the national leader in points, she has elevated her linemates and their play and their bests, as well.” 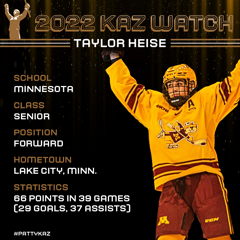 Frost pointed out that new linemates Abigail Boreen and Catie Skaja have scored 59 and 47 points, respectively, after previous season highs of 11 and 14.

“She cares about her teammates, cares about our team’s success over her own,” said Frost, “Just a wonderful person, somebody who’s very competitive, very determined. She’s a vocal leader as well as a leader on the ice.”

Heise, who lives with her two linemates, clearly has enjoyed their success as much as her own.

“I think having such a great off-ice relationship makes it so much easier to play on the ice with them,” Heise said. “I’ve been so excited to watch them grow this year, and I’m just happy to be alongside of them while doing that because I know they have the talent, and they have the confidence.”

Through a variety of volunteer work off the ice, Heise continues to make things better for the people around her.

“It’s also important to give back to the people who have given you the opportunities and the time and the support that I know I’ve gotten,” Heise said. “I think growing up in such a small town like Lake City, whenever I can, I try to come back home and spend time with people who have supported me. 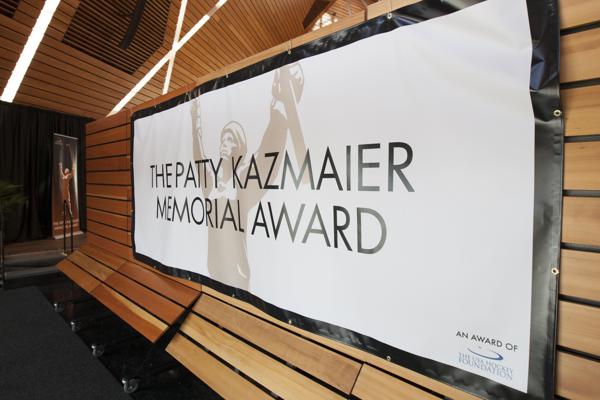 “Just seeing a smile on people’s faces where I know I’ve been very blessed with the way I’ve grown up and the way that I’ve been able to live my life … it’s always awesome to get out and help support people who aren’t always given the best start in life or end in life.”

Frost said that Heise “cares deeply about people and is very grateful for the things that she receives.”

Heise said she’s honored to be among the 10 finalists for the Kazmaier Award. The top-three finalists will be named March 17, while the award will be given March 26.

“I think having my name on the same list as some people I’ve looked up to my whole life is awesome,” Heise said. “And it’s amazing to even be considered as top player in the country knowing that, especially this year, there’s so much talent and so many people who are so deserving.”

With Heise’s leadership, Minnesota earned the No. 2 seed in the NCAA tournament. The Gophers were 29-8-1 after losing a 3-2 overtime thriller to Ohio State in the WCHA championship game.

“As a player, she’s dominant every time she steps on the ice,” Frost said. “She’s very strong, great skater, excellent hands, really good shot, just kind of that complete player that plays in every situation and is somebody that is a threat every time she’s on the ice.

“She just plays with a ton of passion. She plays fast. She plays hard. It’s funny because that’s just kind of her personality.”

Heise said that she entered this year self-motivated to have a special season.

“At the end of the day, God gave me this ability to play the sport that I love, and I’m able to play it every day,” said Heise, “and I know not everybody gets to do that, so [I’m] just grateful for that opportunity.”