The honor, which began 25 years ago in 1998, is presented annually to the top player in NCAA Division I women’s ice hockey.

The 2022 Patty Kazmaier Memorial Award winner will be announced March 26 during an hour-long special on NHL Network beginning at 11:30 a.m. ET.

Leads the NCAA with 66 points (29G, 37A) in 39 games played … Ranks second in the NCAA in goals (29) … Tied for fifth in the NCAA in assists (37) … WCHA Player of the Year ... WCHA Offensive Player of the Year ... All-WCHA First Team Selection … Named HCA National Player of the Month in November … Named WCHA Forward of the Month on three occasions (Nov., Jan., Feb.) … WCHA Forward of the Week once (Jan. 24) … WCHA All-Academic Team honoree … Helped deliver stuffed animals from the Teddy Bear Toss to the Masonic Children’s Hospital … Volunteered at the Blaine Fire Department Food Donation Drive and was Grand Marshal in the parade … Volunteered to read books to children at Bluff View Elementary … Spoke about determination in sport and life at Red Wing High School (alma mater) … Volunteered at Girls in Hockey Weekend with the Minnesota Wild - coached and ran drills with youth girls … Multiple Feed My Starving Children trips.

Tied for third in the nation with 59 points (22G, 37A) in 38 games … Tied for fifth in the NCAA with 37 assists … Ranks second in NCAA with seven game-winning goals … All-WCHA First Team Selection … Named HCA National Player of the Month in December … WCHA Player of the Month in December … WCHA Forward of the Week on two occasions (Jan. 3, Jan. 31) … Named to the WCHA All-Academic Team … 2022 Hockey Humanitarian Finalist … A founder and board member of Sophie’s Squad, a nonprofit organization dedicated to improving the mental health of athletes from the youth level to college ... Coordinated the Sophie’s Squad, Hockey Hits Back game for the Bulldogs that raised $8,000 to provide resources to mental health organizations around Minnesota ... Helps pack bags for game participants to lending her presence at games behind the tables.

Ranks first among defenders and tied for third in the NCAA in points with 59 (21G, 38A) in 36 games … Tied for third in the NCAA with 38 assists … Ranks first among defenders nationally with 21 … Second in the NCAA with 11 power play goals … Named WCHA Defensive Player of the Year … WCHA Final Faceoff's Most Outstanding Player ... All-WCHA First Team selection … Eight-time WCHA Defender of the Week … Four-time WCHA Defender of the Month … WCHA Scholar-Athlete recipient … Undergraduate teaching assistant in the Ohio State College of Engineering … Co-vice president of SHEROs, an organization that provides a safe space for female minority student athletes to have open discussions and promote diversity in sports; assists in the planning of all organization events including general body meetings, fundraisers and community outreach … Supports The 2nd & 7 Foundation in visiting second grade classrooms across Columbus to help combat illiteracy in the community and promote reading to the students. 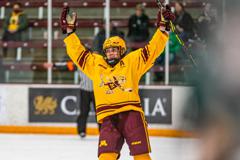 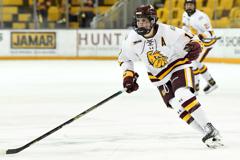 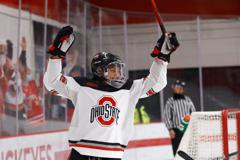 SELECTION PROCESS
The selection process commenced earlier this month when NCAA Division I women's ice hockey coaches were asked to nominate players for the award. Players who were nominated by multiple coaches were then placed on an official ballot, which was returned to the coaches to vote for the ten finalists.

The three finalists, including the recipient of the 2022 Patty Kazmaier Memorial Award, is chosen by a 13-person selection committee made up of NCAA Division I women's ice hockey coaches, representatives of print and broadcast media, and an at-large member and representative of USA Hockey, the national governing body for the sport of ice hockey in the United States.

An award of The USA Hockey Foundation, the Patty Kazmaier Memorial Award is annually presented to the top player in NCAA Division I women's ice hockey. Selection criteria includes outstanding individual and team skills, sportsmanship, performance in the clutch, personal character, competitiveness and a love of hockey. Consideration is also given to academic achievement and civic involvement. 2022 marks the 25th anniversary of the award. For a full list of previous honorees, click HERE.