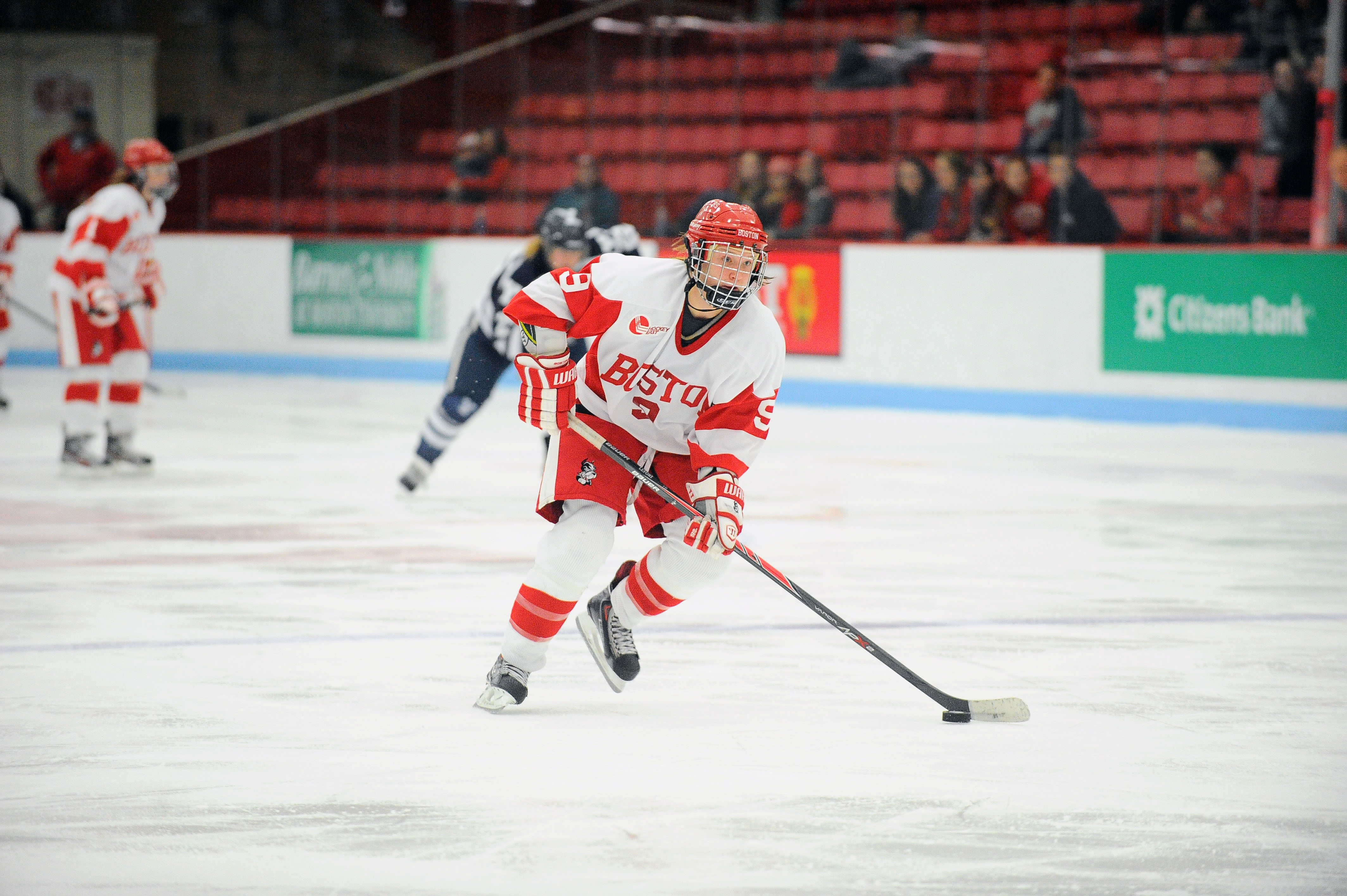 When Sarah Lefort was a little girl in Quebec, she would spend her days skating on frozen ponds with her older brother, Jean Francois.

She’d play goalie for him, pass the puck around and go one-on-one. When the ponds weren’t frozen, they’d play roller hockey.

“We just grew up playing outside,” she said. “I always tagged along with him.”

Now a standout player at Boston University and one of the top scorers in the nation, Lefort credits her brother as the one to spark her interest in the sport and focus her attention on the net.

“He would always tell me, ‘Shoot the puck,’ and I just developed that shot mentality first,” she said. “Yeah, ever since I was little, I guess, I just loved shooting.”

She also picked up something else from him: a fire on the ice. Her coach at BU, Brian Durocher, has said Lefort is “very intense,” “naturally committed” and a team leader, even as a 19-year-old sophomore.

Lefort would agree about her intensity and commitment.

“Going back to my brother, he always commented, ‘Go hard or go home,’ and I think that’s what I try to bring every day,” says the 5-foot-7 forward. “On the ice, in the weight rooms, just giving 100 percent.”

In just her second season of Division I hockey, Lefort has been riding a high with the Terriers. Last season, BU advanced to the championship game of the Frozen Four and went 28-6-3, with Lefort’s 24 goals leading the team. She finished third in the nation among freshman in points per game (1.16), had seven game-winning goals and was runner-up for Hockey East Rookie of the Year.

Not a bad start.

“Honestly, that season was probably the best I could ask for as a freshman year,” she said. “It had a lot to do with the great leaders we had on the team. … You couldn’t ask for better linemates. But also the depth we had.”

Last season, she said, the Terriers advanced as far as they did because they had a “one-game-at-a-time” mentality.

Now, with the graduation of several key seniors and an influx of talented freshmen, the Terriers are off to a 15-3-1 start in 2013-14, are 8-0 in conference and ranked No. 8 nationally. Lefort is doing her part, leading the NCAA in goals scored (16) while ranking tied for ninth with 26 points.

Lefort shrugs off the scoring spree that earned her Hockey East Player of the Week honors and credits the surge to great chemistry with her teammates and some line changes made by Durocher. She says this year’s team continues to improve with increasing contributions from freshmen, older players who’ve stepped into bigger roles because of graduations and adjustments by Durocher.

Plus, new leaders are emerging and players have adjusted to bigger roles. She counts herself in that group. Though just 19, she’s trying to play more of a leadership role. She says she’s tried to help the freshmen with their play, sometimes staying after practice to work on specific things with them.

“I’m trying slowly,” she says, laughing, when asked if as a sophomore she can provide leadership. “Some of the leaders we have this year are really open minded and open to whoever wants to contribute.”

She said she learned by the example of the senior leadership last year. When she stepped up to D1 hockey, more was expected and she learned that to produce, she had to go all out in practice, all the time.

“Just to give it every day in practice, and then the little things will start to show up in games,” she said of the lessons she learned. “And then also just to be confident. The biggest thing I tell freshmen is it takes a little bit of time, but the more you’re confident on the ice, the better you start playing.”

Lefort said she still has much to do to get better, too. In time with Canada’s Under-22 and senior national teams this past offseason, she believes she got some more great opportunities to grow. And she knows she still needs to get better defensively and as a skater. Her skating ability, she says, is her biggest weakness.

“Smoothness and just being efficient with my stride,” she said. “That’s one of the biggest things [to improve].”

As for scoring, commitment and work ethic, she’s skating right along — thanks to an assist from big brother.