COLORADO SPRINGS, Colo. - The USA Hockey Foundation today announced the top-10 finalists for the 2014 Patty Kazmaier Memorial Award. The honor is bestowed annually upon the top player in NCAA Division I women's ice hockey and this year will be unveiled at a brunch ceremony at Oakdale Theater in Wallingford, Conn., on Sat., March 22, as part of the NCAA Women's Frozen Four weekend hosted by Quinnipiac University.

The selection process commenced earlier this month when NCAA Division I women's ice hockey coaches were asked to nominate players for the award. Players who were nominated by two or more coaches were then placed on an official ballot, which was sent back to the coaches to vote for the top-10 finalists. The independent accounting firm PricewaterhouseCoopers, LLP, tabulated the ballots.

The three finalists, including the recipient of the 2014 Patty Kazmaier Memorial Award, will be chosen by a 13-person selection committee made up of NCAA Division I women's ice hockey coaches, representatives of print and broadcast media, an at-large member and a representative of USA Hockey, the national governing body for the sport of ice hockey in the United States. The top-3 finalists will be announced on Thurs., March 6.

Tickets to the 2014 Patty Kazmaier Memorial Award Ceremony and Brunch can be purchased at PattyKaz.com. Individual seats to the event are $65, while tables of 10 are available for $600. A select number of sponsorships and program advertisements are also available.

Notes: Eight schools are represented in the top-10, including two finalists from both Clarkson University and the University of Minnesota ... Among the top-10 finalists are eight forwards, one defenseman and one goaltender, including four seniors, two juniors and four sophomores ... Hannah Brandt was also a 2013 top-10 finalist ... ECAC Hockey leads all conferences with five finalists, while the Western Collegiate Hockey Association boast three finalists, and College Hockey American and the Hockey East Association both are represented with one finalist ... For more information and to signed up for the Kaz Connection, a free monthly e-newsletter dedicated solely to the Patty Kazmaier Memorial Award, please visit PattyKaz.com.

Leads all NCAA defensemen in goals (13), assists (35) and points (48) in 34 games played … Ranks second among all players in assists and seventh overall in points … Averages 1.41 points per game and 1.03 assists per game … Is tied for eighth in the NCAA in power-play goals (6) ... Leads the ECAC in assists (26) in 22 conference outings … Is tied for third in the ECAC in points (32) during conference games … Named ECAC Player of the Week for first week of October …  Active member in the Clarkson women’s hockey team’s participation with Lil’ Knight Club, which volunteers with youth hockey players in the area … Helped paint the Potsdam Helping Hands building … Assisted in fundraising for the Dalton Guyette Memorial Award, given annually to provide opportunities to less fortunate children in the area … Named to the Clarkson University Dean’s List for Fall 2013.

University of Wisconsin • Forward • Senior • River Vale, N.J.
Tied for first in NCAA in power-play goals (8) … Ranks seventh in the nation in goals (22) and 17th in points (39) … Is tied for third nationally in game-winning goals (5) and tied for 10th in the NCAA shorthanded goals (2) … Leads the WCHA in goals (20) during conference action … Ranks fifth in WCHA in points (34) and is tied for 10th in assists (14) in conference play … Named WCHA Offensive Player of the Week on Jan. 22 … Took a month-long trip to Africa during the offseason with Health by Motorbike, an organization dedicated to supplying health camps to women … Active volunteer at the University of Wisconsin Children’s Hospital and at a local senior center in Madison, Wis.

Quinnipiac University • Forward • Senior • Mississauga, Ontario
Tied for seventh in the nation in points (46), eighth in assists (28) and tied for 13th in goals (18) … In ECAC action, is tied for third in goals (12), sixth in points (26) and tied for eighth in assists (14) … Two-time ECAC Player of the Week … Named Quinnipiac’s Athlete of the Month for November … Volunteers at local elementary schools … Participates in clean up efforts with the local Ronald McDonald House … Helped lead a youth hockey clinic for nearly 50 local girls hockey players … Guest speaker on time management skills at a local school. 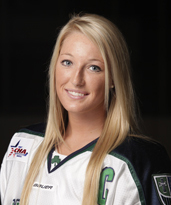 Mercyhurst University • Forward • Senior • Brunkild, Manitoba
Ranks fourth in the country in assists (30), fifth in points (50) and tied for ninth in goals (20) … Is tied for the NCAA lead in shorthanded goals (5) and is tied for 10th nationally in game-winning tallies (4) … Leads the CHA in points (32) and is second in assists (17) … Is tied for first among all CHA players in goals (15) during league play …  CHA Player of the Month for December … Four-time CHA Player of the Week … Awarded Bill Smith Award, given annually to select Mercyhurst senior athletes that best exhibit exemplary qualities in the classroom, community and in athletics … Voluntees at the JFK Center’s after school program … Participated in the “Visit a Vet for Valentine’s Day” at the local VA Hospital.

University of Minnesota • Forward • Junior • Coon Rapids, Minn.
Ranks third nationally in points (52) and assists (32) ... Is tied for ninth in the NCAA in goals (20) … Sits in a 10th-place tie among all NCAA skaters in game-winning goals (4) … Is second in the WCHA in conference points (38) and is tied for third in assists with 23 … Ranks tied for second in the WCHA in goals (15) … Two-time WCHA Offensive Player of the Week … Named a WCHA Scholar Athlete … Volunteers with Skate with Greats public outdoor skate at TCF Bank Stadium and the University of Minnesota Amplatz Children’s Hospital … Aided the Minnesota athletic department’s efforts in the annual toy and food drives.

University of Minnesota • Forward • Sophomore • Vadnais Heights, Minn.
Tied for first nationally in points (55) and leads NCAA in assists (36) and assists per game (1.06) … Is 12th in the NCAA in goals (19) and tied for 10th in game-winning goals (4) … Leads the WCHA in points (40) and assists (26) in conference play … Is tied for fifth in goals (14) … Named WCHA Offensive Player of the Week on Feb. 12 … Selected as a WCHA Scholar Athlete … Volunteered with the University of Minnesota Amplatz Children’s Hospital, Special Olympics of Minnesota, Roseville Youth Hockey Association, Minneapolis Youth Hockey Association, University of Minnesota Medical Center Fairview Hospital, Hope Kids and the Maplewood Care Center.

Boston University • Forward • Sophomore • Ormstown, Quebec
Leads the NCAA in goals (29) and game-winning goals (8), and is tied for fourth in points (51) … Ranks tied for 17th nationally with 22 assists … Tops Hockey East in goals (19), assists (17) and points (36) in conference play …  Named Hockey East Player of the Month for December … Two-time Hockey East Player of the Week … Participated in the Making Strides Against Breast Cancer Walk in October … Active in a holiday reading program during December … Helped efforts for Teddy Bear Toss and National Girls and Women in Sports Day … Took part in Hockey East’s Skating Strides Against Breast Cancer in February … Participates in the College for Every Student program throughout the school year.

Harvard University • Goaltender • Sophomore • Bruderheim, Alberta
Fourth in the NCAA in save percentage (.948) and ninth in goals against average (1.59) … Tied for fifth nationally with five shutouts … Ranks 22nd in minutes played (1425:06) … Leads the ECAC in save percentage (.948), is second in shutouts (5) and third in goals against average (1.51) … Three-time ECAC Goaltender of the Week … Named ECAC Goaltender of the Month for December … Serves as a one-on-one tutor at the Phillips Brooks House Association’s Mission Hill Afterschool Program … Involved with Harvard’s Team IMPACT family.

Clarkson University • Forward • Senior • Kanata, Ontario
Tied for first in the NCAA in points (55), is second in goals (26) and tied for fifth in assists (29) … Is fourth in NCAA in power-play goals (7) and is tied for 10th nationally in game-winning goals (4) ... Ranks first in the ECAC in points (42) and goals (19) and is second in assists (23) during league play … Tops the ECAC in power-play goals with six … Averages 1.91 points per game in ECAC games … Three-time ECAC Player of the Month (November, December, January) … Three-time ECAC Player of the Week … Five-time member of the ECAC Weekly Honor Roll … Active member in the Clarkson women’s hockey team’s participation with Lil’ Knight Club, which volunteers with youth hockey players in the area … Helped paint the Potsdam Helping Hands building … Assisted in fundraising for the Dalton Guyette Memorial Award, given annually to provide opportunities to less fortunate children in the area.

Cornell University • Forward • Junior • Halifax, Nova Scotia
Tied for seventh in the NCAA in points (46) … Tied for second nationally in goals-per-game (0.79), tied for fourth in goals (23) and tied for 15th in assists (23) … Ranks second in the ECAC in both points (37) and goals (19) in conference outings … Sits in a fifth-place tie among ECAC skaters with 18 assists during league play … Named ECAC Player of the Week on Feb. 11 … Participated in the Do it for Daron game on Jan. 31 to raise awareness for mental health issues … Participated in the Athlete Ally game to show support for LGBT inclusion within sports … Registered to donate bone marrow through Be The Match registry … Helped raise money for the Cancer Resource Center of the Finger Lakes … Active in the Cub Club Little Sister Organization.