Jim Rich to Serve as Master of Ceremonies 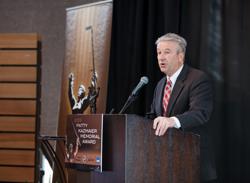 Karyn Bye Dietz (River Falls, Wis.) has been named keynote speaker at the 2015 Patty Kazmaier Memorial Award Ceremony and Brunch, set for Saturday, March 21 at the McNamara Alumni Center on the campus of the University of Minnesota in Minneapolis, Minnesota. Jim Rich (Duluth, Minn.), the longtime sports director at KMSP/Fox 9-TV in Minneapolis will serve as master of ceremonies for the event.

The Patty Kazmaier Memorial Award is presented annually to the top player in NCAA Division I women’s ice hockey by the USA Hockey Foundation. The award is part of the festivities associated with the NCAA Women's Frozen Four, which also takes place at the University of Minnesota.

A pioneer in women’s hockey, Bye Dietz is a two-time Olympian (1998, 2002) and eight-time member of the U.S. Women’s National Team who was recently inducted into the United States Hockey Hall of Fame as part of the Class of 2014.

For 10 years (1992-2002), Bye Dietz was one of the world’s elite players for Team USA. An alternate captain in 1998, she helped Team USA win the first gold medal ever awarded in women’s ice hockey at the Olympic Winter Games in Nagano, Japan.

A native of River Falls, Wisconsin, Bye Dietz was honored as USA Hockey’s Bob Allen Women’s Player of the Year in both 1995 and 1998. In addition, Bye Dietz a member of the 1998 U.S. Olympic Women’s Ice Hockey Team that was inducted into the U.S. Hockey Hall of Fame in 2009 also entered the IIHF Hall of Fame in 2011.

Rich has a long association with USA Hockey and has previously served as master of ceremonies for this event. In addition to his lengthy tenure at KMSP/Fox 9-TV, Rich has been the television play-by-play voice for numerous international tournaments, including Team USA’s first-ever gold medal at both the 2005 International Ice Hockey Federation Women’s World Championship in Linkoping & Norrkoping, Sweden, and the 2004 IIHF World Junior Championship in Helsinki, Finland.

Along with his other duties, Rich is also the host of Fox 9 Sports Now and Minnesota Vikings postgame shows on Fox 9 and is the television play-by-play voice for the St. Cloud State University men’s ice hockey team. He previously created and was the host of the nationally syndicated College Hockey USA television program that ran for 15 years (1986-2001) across the United States and Canada.