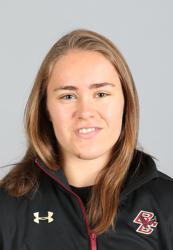 Alex Carpenter (North Reading, Mass.), a junior forward from Boston College, was awarded the 2015 Patty Kazmaier Memorial Award today, before a capicity crowd, at the McNamara Alumni Center on the campus of the University of Minnesota. The award, in its 18th year, is presented annually to the top player in NCAA Division I women's ice hockey by The USA Hockey Foundation.

"Alex is as dynamic of a player as there is in college hockey," said Katie King Crowley, head coach at Boston College. "Her passion and love for the game of hockey are immeasurable. Alex makes everyone around her better with her intensity, her work ethic, and her desire to help her team to win. She is not only an offensive threat, but is an all around threat whether it's on the penalty kill or in the defensive zone. Alex is a leader for our team with her ability to compete at such a high level consistently. I feel very fortunate to be able to coach Alex, as she has been extremely valuable in changing the landscape Boston College hockey."

In Hockey East competition, Carpenter notched 51 points (26 goals, 25 assists) in 25 games, leading most offensive scoring categories. She led the conference in points en route to being named the WHEA Player of the Year and a WHEA First Team All-Star selection. She also led the league with 1.00 assists per game and eight game-winning goals.

Off the ice, Carpenter is active in the local community and volunteers her time at places such as Team IMPACT and Athletes Unlimited Newton.

A complete listing of past winners is available here.

NOTES: Alex Carpenter is the first Patty Kazmaier Memorial Award winner from Boston College and the first WHEA player to earn the award ... The 2015 Patty Kazmaier Memorial Award Ceremony and Brunch was staged on the campus of the University of Minnesota at the McNamara Alumni Center and was part of the festivities associated with the NCAA Women's Frozen Four ...Karyn Bye Dietz, a 2014 U.S. Hockey Hall of Fame inductee, was the keynote speaker and Jim Rich, sports director for KMSP/FOX-9-TV in Minneapolis-St. Paul, served as the master of ceremonies ... The ceremony can be watched on demand at USAHockey.FASTHockey.com and PattyKaz.com ... The 2015 Patty Kazmaier Memorial Award winner was chosen by a 13-member selection committee comprised of NCAA Division I women's ice hockey coaches, representatives of print and broadcast media, an at-large member and a representative of USA Hockey, the national governing body for the sport of ice hockey in the United States. The independent accounting firm PricewaterhouseCoopers, LLP, tabulated the ballots ... For more information on the Patty Kazmaier Memorial Award and Patty Kazmaier, visit PattyKaz.com.

ABOUT THE PATTY KAZMAIER MEMORIAL AWARD
An award of The USA Hockey Foundation, the Patty Kazmaier Memorial Award is annually presented to the top player in NCAA Division I women's ice hockey. Selection criteria includes outstanding individual and team skills, sportsmanship, performance in the clutch, personal character, competitiveness and a love of hockey. Consideration is also given to academic achievement and civic involvement.

ABOUT PATTY KAZMAIER
The Patty Kazmaier Memorial Award is named in honor of the late Patty Kazmaier, who was a four-year varsity letter-winner and All-Ivy League defenseman at Princeton University from 1981-86. An accomplished athlete who helped lead the Tigers to the Ivy League Championship in three consecutive seasons (1981-84), Patty Kazmaier-Sandt died on Feb. 15, 1990, at the age of 28 following a long struggle with a rare blood disease.