Nineteenth Annual Award to be Presented March 19 in New Hampshire 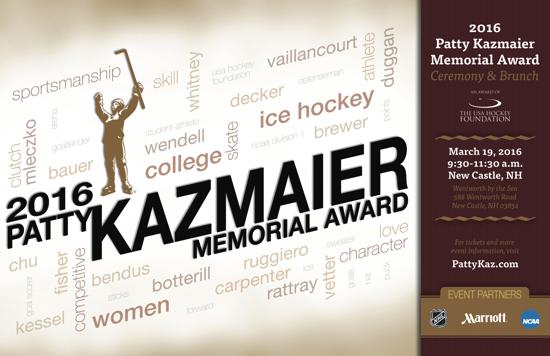 Tickets to the 2016 Patty Kazmaier Memorial Award Ceremony and Brunch, set for Saturday, March 19, in New Castle, New Hampshire, are now on sale, USA Hockey announced today. The award will be presented during a ceremony at Wentworth By The Sea.

An award of The USA Hockey Foundation, the Patty Kazmaier Memorial Award is annually bestowed upon the top player in NCAA Division I women's ice hockey. The award will be presented at a brunch ceremony and is part of the festivities associated with the NCAA Women's Frozen Four, which will take place at Whittemore Center Arena in Durham, New Hampshire.

NOTES: Individual seats to the event are $65, while tables of 12 are available for $700. A select number of event sponsorships and program advertisements are also still available. More information can be found here. The Patty Kazmaier Memorial Award is supported, in part, by a grant from the NHL Foundation