Kaz Watch: Stalder Among Best in Nation After Switch to Forward

Switzerland native has become one of college hockey’s brightest stars 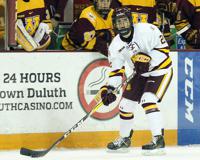 When University of Minnesota-Duluth standout Lara Stalder initially came to the United States from Switzerland, she thought she would play hockey for four years and maybe return to her home country.

She never dreamed she would be considered among the top players in the nation.

Stalder was a freshman at Minnesota-Duluth when she won a bronze medal with Switzerland's national team during the 2014 Olympic Winter Games in Sochi, Russia. Now, as a senior, Stalder ranks among the leading scorers in NCAA Division I women’s hockey.

“It kind of sounds weird to me because you always look up to the best players,” Stalder said. “The U.S. and Canada, you play them during international event’s and they’re at another level, but to be considered among them is kind of unreal.”

Stalder is also honored to be in the conversation for the Patty Kazmaier Award, presented annually to the top player in NCAA Division I women’s ice hockey. Her current focus is on next month’s Olympic qualification tournament with Switzerland, which could determine her professional future.

Stalder, who will graduate in May with a marketing analytics degree, was also drafted into the National Women’s Hockey League (NWHL) by the Boston Pride, which could also be a future option.

“The Olympic qualification tournament is pretty much my turning point because I really hope we can qualify for the Olympics,” Stalder said. “Then I would prepare for the Olympics and probably continue my hockey career either here in the U.S. or maybe back home. I don’t really know yet. It’s still pretty open.”

Stalder, prior to her time at Minnesota-Duluth, played in the Swiss A League, winning a national championship and finishing third among defenders in scoring. She said it was a surprise to be drafted No. 20 overall by the Pride during the 2016 NWHL Draft.

“That just opened another door for me to think about,” Stalder said. “It would also be great to prepare for the Olympics if that’s the case.”

A switch from defense to forward may have been the most beneficial move for Stalder’s career.

Stalder was moved to center during the Olympics with Switzerland, and then became a forward at the beginning of her sophomore year at Minnesota-Duluth. She’s now a standout winger with the Bulldogs.

“I was always an offensive defenseman, so I always had that drive to the net,” Stalder said.

Stalder, who ranked fourth in scoring in the nation among rookies as a freshman, ranked third on the team with 10 goals and 29 points in 37 games during her first year as a forward. Stalder registered 17 goals and 41 points in 34 games last season — finishing in the top 10 in WCHA scoring — and appears well on her way to breaking that mark as a senior.

She has 39 points through 24 games, and is fresh off her first hat trick of the season in a 5-1 win over Bemidji State on Friday night.

Consistency has been the key.

“Mentally, I would say that’s where I improved the most,” Stalder said. “Hockey is a game of mistakes and how you deal with them. That’s how I have kind of improved over the years, just working hard every day, getting better and never being satisfied.”

That work ethic also extends into the classroom where Stalder was honored as a WCHA scholar-athlete for the 2015-16 season. Stalder, whose grade-point average is 3.7, had to carry a GPA of at least 3.5 the previous two semesters.

“I came here because I wanted to put everything under one hat with hockey and school,” Stalder said. “I’m competitive in hockey, but I also want to be a good student.”

And Stalder’s time overseas at Minnesota-Duluth has been life changing, not only in the classroom, but also on the ice.

“It’s huge [in America] and so professional,” Stalder said. “You get better every day and just improve as a player and a person. Just comparing it to hockey at home, it’s just so big and it’s like professional hockey for me. Then, getting the bachelor’s degree is the perfect ending.”

The 2017 Patty Kazmaier Memorial Award will be presented during a brunch ceremony on Saturday, March 18 at 9:30 a.m CT in St. Charles, Missouri. Further event details and ticket information will be released at a later time.

Lonergan was off the ice for 14 months after surgery

Goaltender led nation in goals against average, save percentage, and shutouts

Winner To Be Unveiled Live On NHL Network March 27