The Patty Kazmaier Memorial Award is presented annually to the top player in NCAA Division I women’s ice hockey by the USA Hockey Foundation. The award is part of the festivities associated with the NCAA Women's Frozen Four weekend hosted by Lindenwood University.

Laura Halldorson played alongside Patty Kazmaier for three seasons on the women's hockey team at Princeton University, where she helped the Tigers win three Ivy League titles and served as a co-captain during her senior season.

In 1996, Halldorson became the inaugural head women's hockey coach at the University of Minnesota and remained in her position for 10 seasons. Under her leadership, the Gophers won three national championships, including back-to-back titles in 2004 and 2005. Halldorson was named national coach of the year three times while compiling a 278-67-22 overall record. She was inducted into the University of Minnesota "M" Club Hall of Fame in 2014.

Since retiring from coaching women's college hockey, Halldorson has been a part of the Golden Gopher Fund, which is the fundraising arm for the University of Minnesota's athletic department. In addition to her current duties at Minnesota, Halldorson is working with an elite, post-collegiate women's hockey team called the Minnesota Whitecaps.

Andy Strickland is an award-winning broadcaster who has covered the National Hockey League for almost 20 years. He is currently in his fourth season as the rinkside reporter for the St. Louis Blues on Fox Sports Midwest, and is widely known for his hockey coverage across radio and television platforms throughout the United States and Canada. 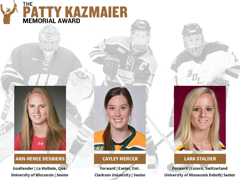 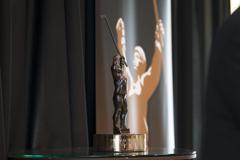