MINNEAPOLIS – Daryl Watts (Toronto, Ont.), a freshman forward from Boston College, was awarded the 2018 Patty Kazmaier Memorial Award here today at the McNamara Alumni Center as part of the NCAA Women’s Frozen Four weekend hosted by the University of Minnesota. The award, which is in its 21st year, is presented annually to the top player in NCAA Division I women’s ice hockey by The USA Hockey Foundation.

Watts, who became the first freshman ever to claim the honor, was selected from a group of top-three finalists that included senior forward Victoria Bach (Milton, Ont./Boston University) and junior forward Loren Gabel (Kitchener, Ont./Clarkson University).

“I’ve been fortunate to coach some very elite players in my career at BC and Daryl Watts has put herself in that category after just one year” said Boston College head coach Katie Crowley. “Her statistics prove she’s the most dynamic player in the country and rank her with the best players in NCAA history. Daryl has set a new standard, not just for young players, but all players.”

The BC Eagle is the nation’s leading scorer with 82 points, and found the scoresheet in 32-of-34 regular-season games this season. She recorded multiple points in 25 games, including 11 multi-goal games, and tied the Hockey East single-season records for goals (30) and points (55). In addition to setting the Hockey East freshman points, goals and assists records, Watts also achieved the second highest single-season point total in Boston College history.

A complete listing of past winners of the Patty Kazmaier Memorial Award is available here.

NOTES: Daryl Watts is the first freshman in history to win the Patty Kazmaier Memorial Award, and the second Boston College player, joining Alex Carpenter who claimed the title in 2015 … Laura Halldorson offered remarks at the 2018 Patty Kazmaier Memorial Award Ceremony, and Fox Sports 9 broadcaster Jim Rich served as the master of ceremonies … The 2018 Patty Kazmaier Memorial Award winner and the top-three finalists were chosen by a 13-person selection committee made up of NCAA Division I women’s ice hockey coaches, representatives of print and broadcast media, an at-large member and a representative of USA Hockey, the national governing body for the sport of ice hockey in the United States. The independent accounting firm PricewaterhouseCoopers, LLP, tabulated the ballots. 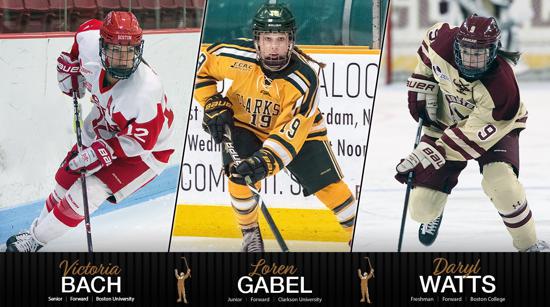 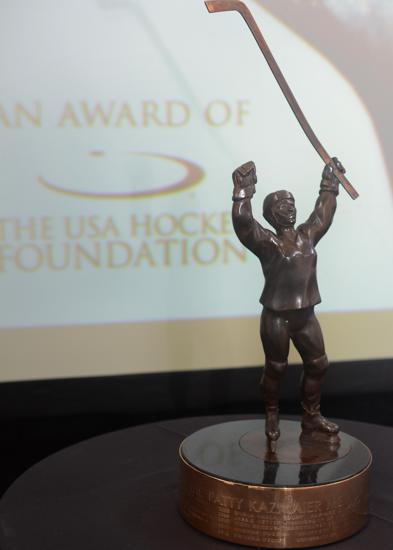