Olympic standout from Switzerland is now tearing up the college ranks

Her success has placed her in the discussion for the prestigious Patty Kazmaier Award, presented annually to the top women’s college hockey player in the nation.

“That’s a big honor,” Mueller said. “My teammates put me in good position and give me great opportunities every night. It’s the highest award you can win in NCAA women’s hockey, and to be in consideration is unbelievable to me. It’s nice if you win something individually, but I want to be successful with my team. We have big goals, and I want to achieve those first, of course.” 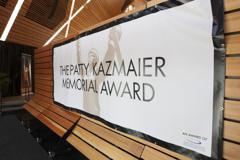 Mueller leads Northeastern with 14 goals and 35 points. She’s the highest-scoring freshman in the NCAA and ranks tied for fifth in overall league scoring. Mueller is also riding an NCAA-best 22-game point streak, the longest scoring streak of any Division I women’s player this season.

“It’s going well right now,” Mueller said. “I had to adapt to the smaller ice and a new style of hockey, but I really like it. It’s getting better and better every day and every game.”

Prior to arriving at Northeastern, Mueller, a native of Wintethur, Switzerland, made an impact in the 2014 and 2018 Olympic Winter Games with the Swiss National Team, while also starring in the Swiss Women’s Hockey League. She also played boys hockey while growing up in Switzerland.

“It’s a faster women’s hockey league than in Switzerland, and you can play harder,” Mueller said. “I played with the boys in the past and I’m used to quick hockey. It’s not a big adjustment, but it’s different.”

“I feel I had to adapt to this kind of game,” Mueller said. “I just feel comfortable now.”

“[Playing in boys leagues] really helped me get stronger, and helped me have my head up, be aware and play fast,” Mueller said. “Also, we competed every weekend, so that’s why my body is used to it.”

Mueller said Northeastern pursued her early in the recruiting process. Additionally, Julia Marty and Florence Schelling, teammates with the Swiss National Team, both played at Northeastern and shared their recommendation.

“I was so excited to come to Northeastern for the lifestyle, to play hockey and go to college,” Mueller said. “That was a big dream of mine. I came here to Boston for a visit, I liked it and it was an easy decision. The best part was the way my teammates liked me. They really helped everything and made school a lot easier.”

Prior to her time at Northeastern, Mueller, at 15, became the youngest hockey player to ever win an Olympic medal when she scored the game-winning goal against Sweden in the bronze-medal game during the 2014 Winter Games in Sochi, Russia.

During the 2018 Games in PyeongChang, South Korea, Mueller equaled an Olympic record for the most goals scored by a woman in a single game with a first-period hat trick and a fourth goal in the second. Mueller, who helped Zurich to the league title of the Swiss Women’s Hockey League, led all players in PyeongChang with 10 points in six games and was named “Best Forward” at the competition.

“I will never forget both of those tournaments, and of course the bronze medal was a highlight,” Mueller said. “I was just thankful to be on the team in the first Olympics. The second Olympics I had a bigger role and I was one of the experienced players on the team, even though I was still pretty young. I’ll never forget that time.”

Mueller hopes for additional experiences during her time at Northeastern.

“I just enjoy being here,” Mueller said. “I always need to be ready to work hard and I can improve my skills every day here. I just always focus on what I can do to change and improve. That was my big dream, to play this kind of hockey.”